The Moran Contemporary Photographic Prize (MCPP) was established in 2007 by the Moran Arts Foundation to award and promote Australian contemporary photography and excellence in all forms of still, photo based artwork -­ including analogue and digital photography or staged and directorial photo-­media work.

The Moran Contemporary Photographic Prize is one of Australia’s richest photography prizes.  The competition is open to Australian citizens or residents of at least 12 months.

Please click on an image to view Gallery in full size 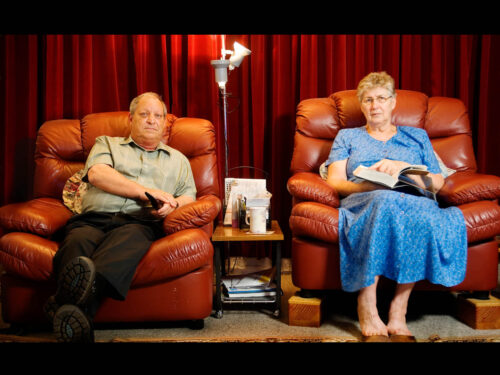 Terry and Bev Hicks on the five year anniversary of David’s detainment.

As an Adelaide based photographer, I have been fortunate to follow Terry Hicks' story since 2002.  I visited Terry and his wife Bev several times during the week of the five year anniversary of David's detention (January 2007).  What struck me most is that their familiar suburban life is accompanied by the most extraordinary circumstances.  In the Hicks' home, there is a steady stream of journalists, photographers, camera crews, lawyers and supporters. The phone rings constantly.  Since 2002 Terry Hicks has become the spokesperson for an international campaign for the right to a fair trial for his son (and others) detained in Guantanamo Bay, as alleged terrorists.

This image is a 'family portrait' of my 101 year old grandmother, my mother, myself and my precious child Dieter.  All born in a century of rapid cultural change.  Ther perception of the inseparable physical bond reflects the invisible unbreakable emotional bond between us.  On the lighter side, my grandmother said that she was pleased that she finally got asked to be a centrefold. Amazing what your family has to put up with when you are a photographer. 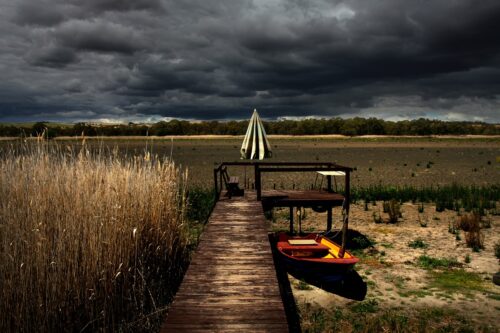 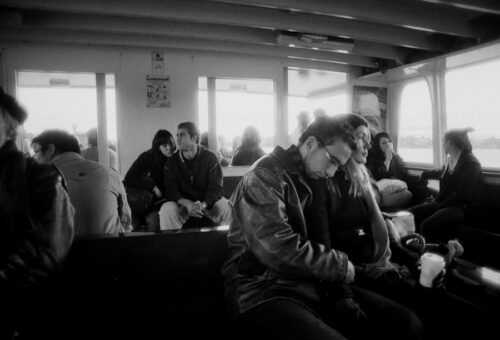 Sewell has made his name as an independent documentary photographer concentrating his gaze on the social implications of the new globalised world economy and the environmental consequences exerted by climate change. 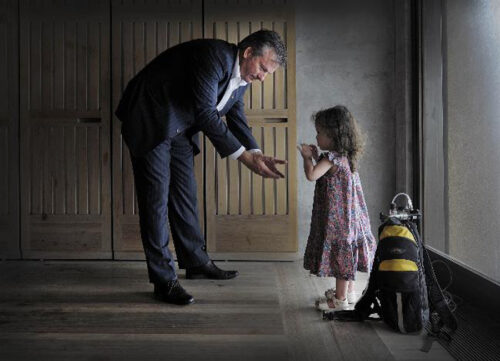 This image was shot on 'World Rare Disease Day', backstage at the Sydney Opera House, just prior to Steve and Sarah going on to deliver a speech.  Sarah Walker is 3 years old and suffers from one of the world's rarest diseases - 'interstitial lung disease'. 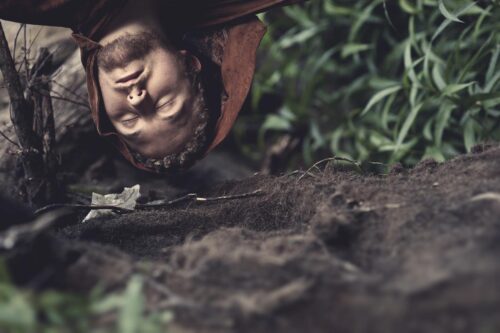 Kelsey Austin Walsh
The World Inside My Mind

A self-portrait expressing the importance of just being yourself, and not trying to hide who you truly are. The music pumps through his veins egging him on, urging him to move, but he can’t. Too afraid to move, too shy to be himself, he stands in the dark, closes his eyes and dances on the inside. 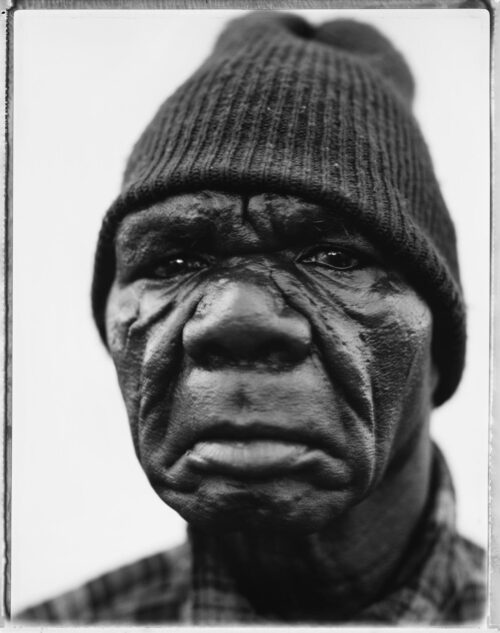 I met former boxer, Noel Charlie, in Port Hedland Western Australia. He was travelling with the Kiwikurra boys - a band from the remote Western Desert. I was just finishing up a photo session for my ongoing Polaroid project ‘Marnti Warajanga’ when he walked over to my daylight studio (which consists of a bed sheet taped to a wall) and asked me: ‘hey mate can you take my photo?’ I use a large format camera and Polaroid Type 665 film. 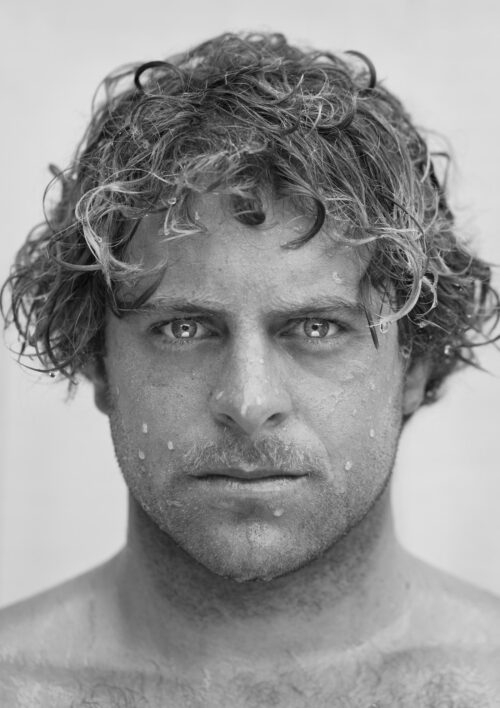 Marti is a professional big wave surfer so when photographing him, I felt it imperative to portray his connection with and love of the ocean. I photographed Marti when he had just returned from the surf and the water was still dripping from his hair. Through his portrait, I hope not only to have captured his passion but to have also portrayed a glimpse into his soul. 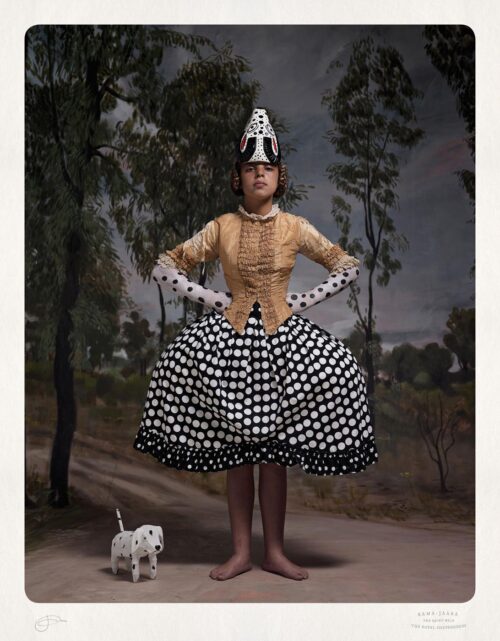 This image is part of a recent series where I photographed friends and family in front of hand-painted backdrops, using a digital Hasselblad.  The young model, Mimi, is quite shy, in this picture I think I was able to bring out an inner strength that I observed in her over the years. 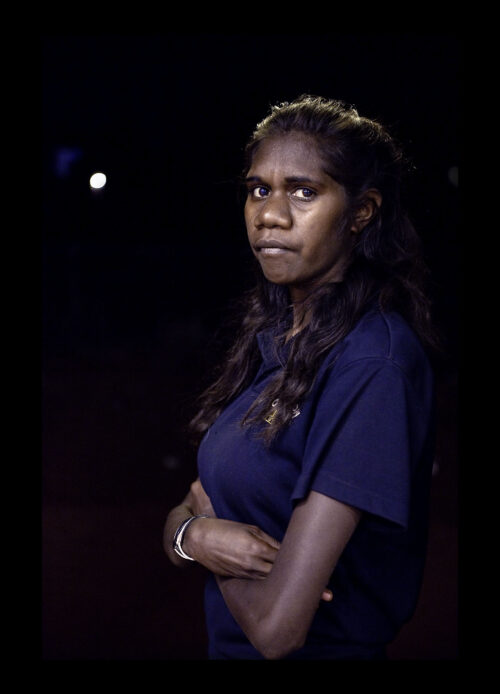 I first visited the remote aboriginal community of Nyirripi in the Northern Territory in 1998 to produce a documentary with local filmmakers. Returning 15 years later little had changed.

'On my first night back, I went down to the local community centre – a large corrugated iron shed – where they were holding a disco. I took a series of impromptu portraits, this being one of them. It was only when I (much later) downloaded this photograph that I realised that this young woman was giving me ‘the finger’. I see it as a testament to strength, resistance and irreverence.' 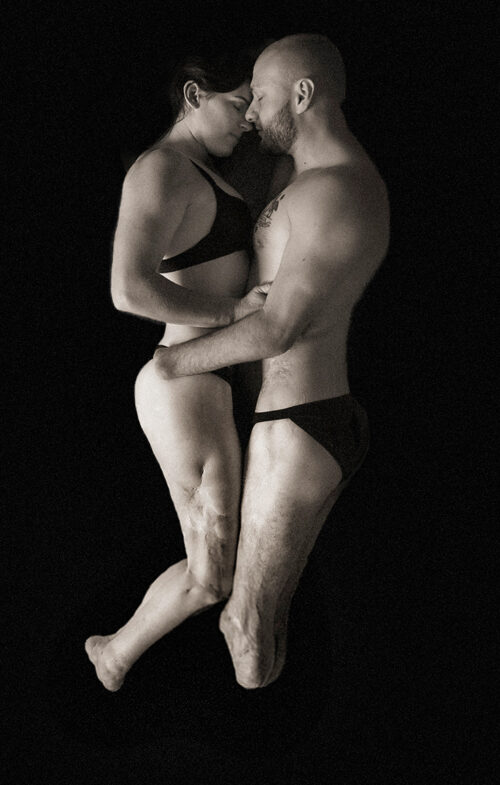 Suzanne McCorkell
Time Out From Training

This piece is part of the 'Scar Stories' Project. Scar Stories is a collection of images which aims to empower young cancer survivors who are living daily life with the scars from cancer. Chris and Bridie are a couple and spend most of their time training for the Paralympics. My aim for this image was to create a warm, beautiful feeling of intimacy, whilst highlighting the difficulties they are challenged with on a daily basis. 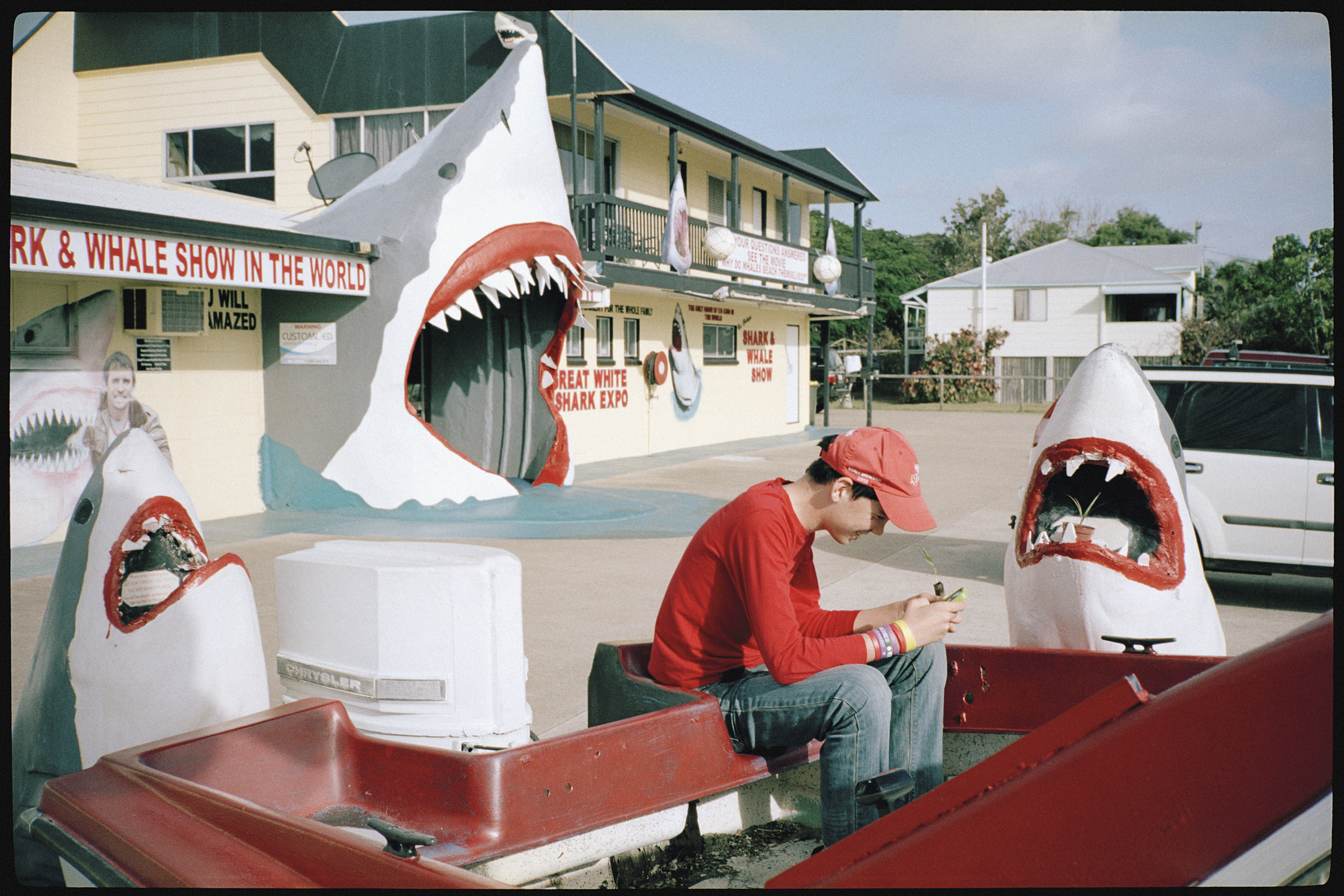 A spell of fatal shark attacks on the northern NSW beaches sent waves of fear along the east coast, sparking controversy about shark culling nationwide. During the very peak of this time, I photographed a boy wearing a red shirt and hat.

The resulting picture arose from the collision between a highly topical subject, a controversial location and an emotional period. A snapshot or not? Do we choose pictures? Do they choose us? It may be candid, ironic and irreverent. Or simply today, a boy in a boat. 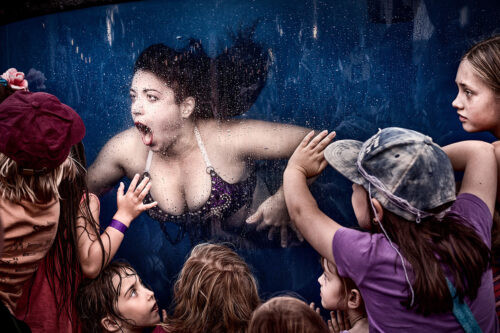 The kids are mesmerised by mermaid Tina Tuna, who puts on a dramatic show at Perth Fringe Festival. 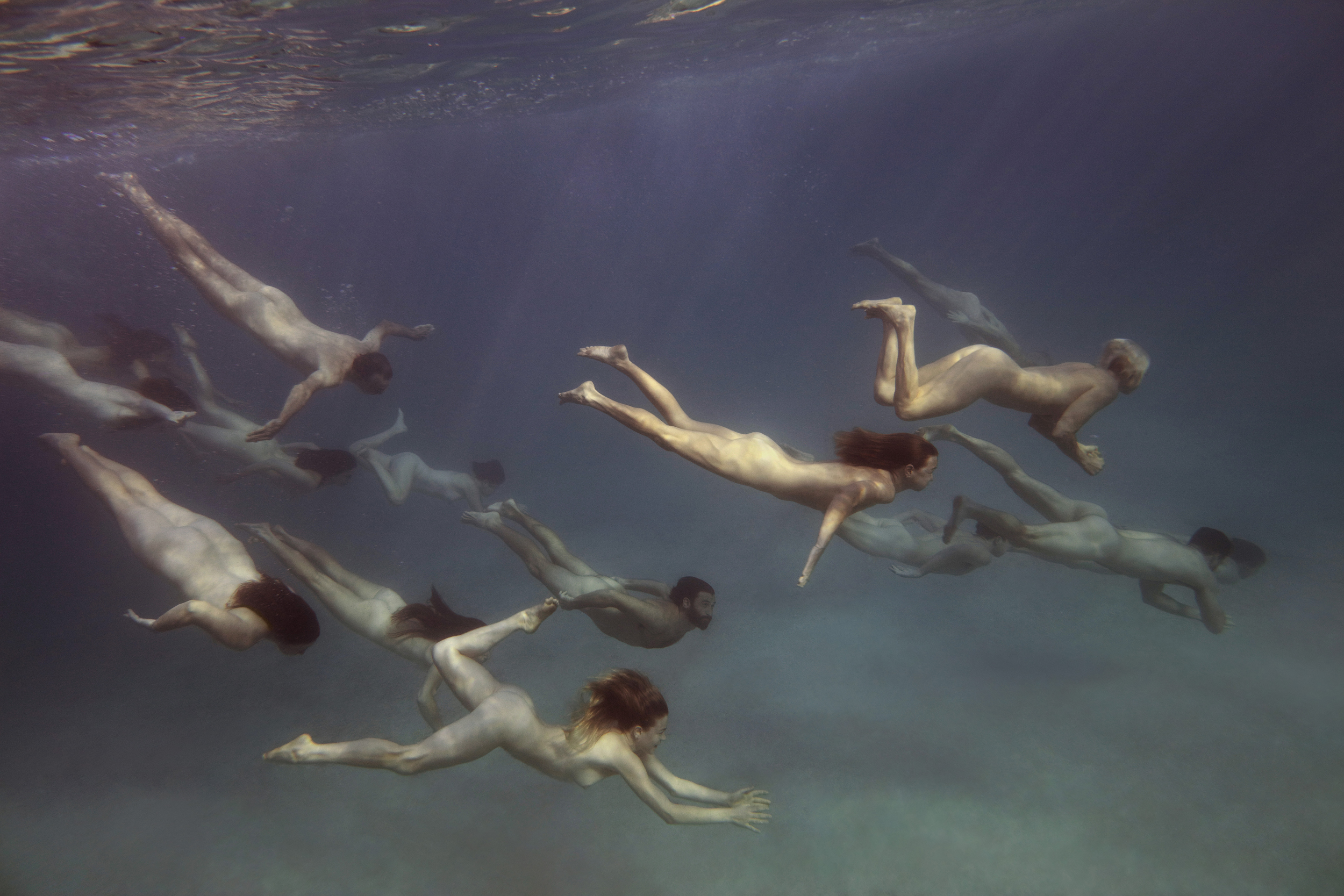 The Great Barrier Reef, the world’s largest living marine structure, is finding little reprieve from more intense and frequent marine heat waves brought on by climate change that cause devastating bleaching. Biologists predict that if we continue carrying on the way we are then by the end of this century 50% of species living today will face extinction. And humans are not immune. To see ourselves as different and separate to the ecology and ecosystem of our planet is leaving humanity unprepared.  We are mammals in a sensitive ecosystem, vulnerable to the same forces of climate change as every other living creature. 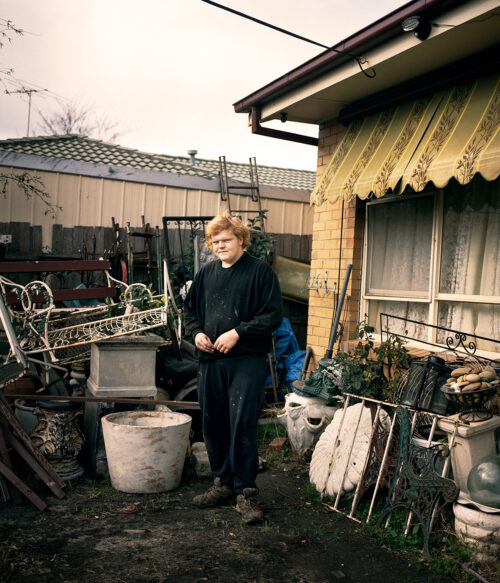 Zach standing in front of his friends’ home in ‘The Pines’.  ‘The Pines’ is an Australian town that sits on the fringes of society. It is a suburb like many others that can’t shake
the stigmas of drugs and crime. Occupants like Zach seem to feel the centripetal pull of Australian society here.